Home Blog Can I Ride A Mountain Bike On The Road

The main worry cyclists have, apart from traffic, is whether their bicycle is suitable for certain terrains.  You don’t want to splurge on a brand new bike and found out it’s impossible to ride in the city.

One question that has many of us stumped is “can I ride a mountain bike on the road?” Don’t worry, we’ve got the answers.  Stick around to find out. 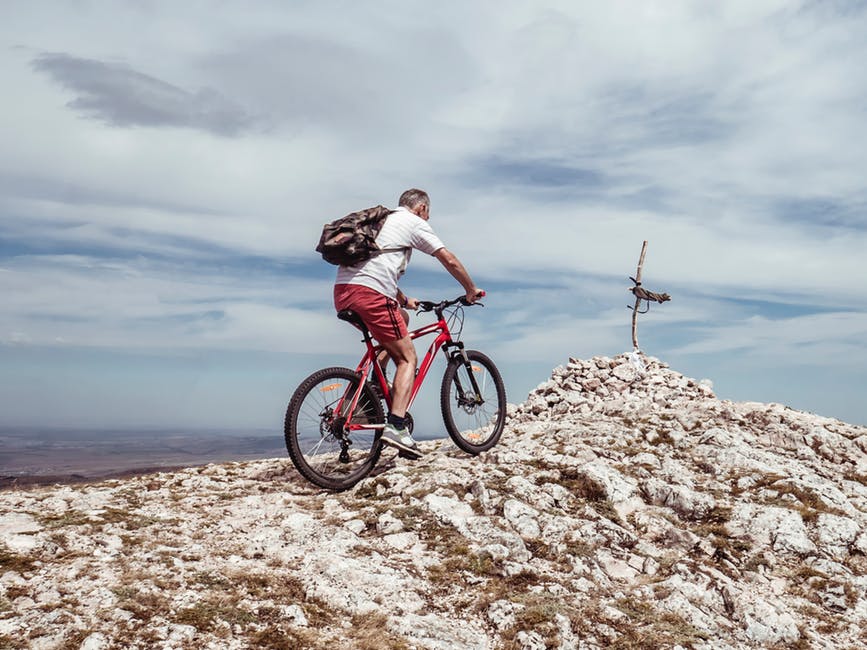 First, What Is a Mountain Bike Used For?

Before we can decide whether riding a mountain bike on the road is possible, we must see what mountain bikes are made for.

A mountain bike is designed for going on- and off-road.  It depends on the various trails it can handle, for example, cross-country bikes are for mild trails, dirt roads, and paved roads.

The best way to distinguish between bikes is by looking at the tires.  Mountain bike tires are wider and have greater rolling resistance so it takes more effort to push.  Mountain bikes are also heavier as they have to withstand the pressure of jumps and bumps.

What are Road Bicycles or Hybrid Bikes?

As implied in the name, road bikes are built so they can cruise along smooth roads.  You can ride them on the pavement, clear in their tires as they’re thin, smooth, and have low rolling resistance.  They also don’t have good enough traction to use on trails.

When you’re riding on-road, you must get into a “dropped” riding position whereas mountain bikes keep you sitting upright.  Another variation of the bicycle is the hybrid or cross bike, easy to pedal as a road bike while being as comfortable and versatile as a mountain bike.

Can I Ride a Mountain Bike On the Road?

So you’re wondering “can you ride a mountain bike on the road?” and the answer is yes!

It depends on the mountain bike, for example, if you get one that goes downhill then it will be harder to climb with compared to a road bike.  But overall, it will be fine.

How Can You Make the Cycle Better With a Mountain Bike?

You can make a few tweaks to make the ride more enjoyable.  The first obstacle is the tires as they make a huge difference.

Road tires offer no off-road traction and have the sole purpose of low-resistance racing.  If you’re going to the city for the day, pump your mountain bike tires to 40-50 PSI, so they roll quicker.  Or invest in 1.5-inch slick tires if you’re going on longer trips.

It’s important to note that if you have chunky tires for off-road, they will wear down quickly and won’t give you the same level of grip as a road bike’s tire.

Another way to optimize your mountain bike for street riding is by dialing in the suspension.  Road bikes have no suspension but it’s possible, on some mountain bikes, to adjust it to lockout so it acts like a road bike.

Don’t have lockout?  Instead, increase the air pressure in your suspension to stiffen it up which will reduce any bobbing when you pedal and stand to climb.

Does Gearing Play A Major Role?

If you get a pair of slick tires, you’ll also get different rear gears which will improve gearing on your mountain bike.  As mountain bikes are designed to accommodate steep climbs, you’ll need to spin quickly once the speed comes up.  To play it safe, ask your local mechanic about your gearing options for road biking.

Which Mountain Bicycle is Best Suited For Road Use?

Not everyone is willing to swap out their mountain bicycle for a road bike, and that’s fine!

Aim to get an all-around mountain bike that can do trails, normal jumps, dirt roads, and pavements.  For example, an XC mountain bike with a rear suspension lockout with spare road tires will do the trick.  Also, it’s important to avoid dual-suspension mountain bikes as you’ll have a weightier bike with less speed.

Another useful addition would be to add mudguards.  Even though mountain bikes are designed for muddy trails, only a few come with mudguards.  As you’ll be in the city, fit a pair on the front and rear tires to prevent any water or dirt from the road ruining your clothes.

Also, if you’re commuting, consider the distance you’ll be covering daily to see whether it’s practical.  If you live less than 10 kilometers away, then it’s manageable, whereas traveling longer distances will be harder because mountain bikes are ultimately designed for rigorous trails.

Why not search for the best folding mountain bike so it’s practical when you’re commuting to work?

Other Riding Adjustments You Can Make

If your mountain bike still doesn’t feel 100% ready to hit the road, try dropping your handlebars lower than usual.  Road bikers have lower handlebars as it improves their aerodynamics, the opposite for mountain bikers who rely on higher bars to maintain control.

Simply lower the stem on the steer tube but be careful, your body may feel that the position changes the pressure on your hands.  Also, you’ll notice more saddle pressure as you bend forward.

Will You Ride Your Mountain Bike On the Road?

Now you’ve seen the answers to “can I ride a mountain bike on the road?”, it’s up to you whether you want to ride your mountain bike on the streets.  If so, bring a spare pair of road tires to get the best effect and also install mudflaps to prevent any splatters of dirt.

Need advice on your next bike purchase?  We’d love to hear from you. Contact us here for further details.