While are watching futuristic movies, we can see that there are a plethora of technological things that we could expect to see in the future. Some of the people are not limiting themselves to imagining those, but they are putting in an effort to make it real.

For example, a Brazilian Marques Tarso, the formula driver, who is well-known only to the die-hard fans of this sport is also a custom vehicle designer. We are going to present you with his creation. It`s a TMC Dumont motorcycle. It looks like it came out straight of some superhero movies like Batman, or some sci-fi ones.

Just imagine, an airplane engine on two wheels. Where is the to the possibilities for this machine? All you knew about motorcycles will soon be history after this one becomes a common thing. Some people are calling it a rocket.

Tarso needed over than fifteen years to start working on this project. The reason is that he couldn`t acquire the proper airplane engine he wanted from the start. After he got it, he started working on the project. It took about slightly more than half a year to complete it.

After the completion, the machine was presented on various shows throughout the US and Europe. As Tarso said, he doesn`t want to make a profit out of this project, but he is open to working on the new similar projects. 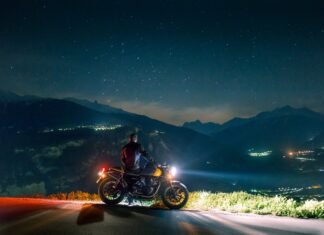